Becoming Friends With Your New Guitar Is The Next Step

Now that you have a new beginner guitar, the next step is to become friends with it.

Well, in order to make friends with your guitar, you will need to learn what some of its various components are called. Once you’ve become familiar with this terminology, we’ll be on the same page during our discussions and lessons.

So, now let’s learn what these things are and where they are found.

The Head is where the tuning pegs and the nut are located.

There is one tuning peg for each string The strings go in their respective pegs,

and are then tightened until they are in tune.

The nut is located right where the head joins the Neck. It simply holds the

strings in place. The nut can be made from a number of different materials

Unless you purchased a high-end guitar, the nut on your guitar is probably made of plastic or corian.

always glued to the neck, and is often made of rosewood or maple.

Maple is a lighter wood, and many folks say that maple produces

Frankly, I’ve never known what type of wood my fretboards have been

I have always found that the greatest differentiation in sound quality

has been the result of the strings I’ve used. We’ll discuss strings at

separate the fretboard into individual frets. They are most often made of copper, nickel and zinc. Sometimes stainless steel.

For the most part, if you have an issue with your fret wires, you should talk to a Luthier. However, on your newly purchased beginner guitar you shouldn’t have any fret wire concerns.

After much use, they may need “fret dressing” due to a vibration sound, but this is most often done by a Luthier.

The truss rod is found in the neck, running the length of the neck. The truss rod helps to alleviate the tension caused by

the tight strings. It can also be adjusted, (and sometimes is), to effect changes in the action. 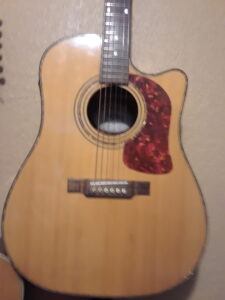 In the body we find all kinds of stuff.

The sound hole helps to amplify the string vibrations to project the guitar sound.

As you can see in the image, the body is where we find the “cutaway” shape. In

our image, there is a cutaway, and this feature adds a bit more accessibility to the

The pickguard is also found on the body. The pickguard protects the body from damage resulting from continuous strumming with a pick.

The bridge, too, is located on the body. The bridge is most commonly made of either rosewood or ebony The strings on an accoustic guitar are often held through holes in the bridge with wedge pins to hold them. On classical guitars, the strings are tied to the bridge.

The bridge saddle fits in the bridge. It should be made of bone, and if it isn’t, it’s very inexpensive to replace.

No matter how the strings are secured, once they leave their origination point, they cross the bridge and bridge saddle and then continue until they terminate at the tuning pegs. The bridge not only separates the strings, it also transfers the string vibrations to the body, producing sound. This sound is then amplified through the sound hole.

Are We Friends Yet?

So, that’s about it. Your increasing familiarity with the things that make up your guitar should help you to become friends with it.

In our next introductory session, we will learn about strings, picks and tuning

After that, it’s off to the races. You’ll finally get the opportunity to start learning to play your guitar.

It’s not that difficult, so join us for that!!